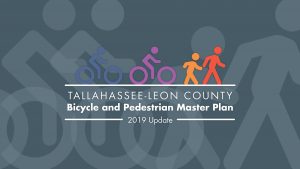 At the November 19, 2019 CRTPA Board meeting, members accepted the Tallahassee-Leon County Bicycle and Pedestrian Master Plan projects (BPMP) with the document adopted in June of 2020.

This Plan was completed to make walking and bicycling more convenient and safer for citizens and visitors. Originally developed in 2004, the Plan needed updating since the City of Tallahassee and Leon County have implemented bike and pedestrians facilities including shared-use paths and bike lanes. Additionally, the CRTPA and Blueprint have projects and plans for expanding these systems in the region and Tallahassee/Leon County, respectively.

For a quick reference, the adopted BPMP documents are listed below.

The Goal of the BPMP was to make traveling as a bicyclist or pedestrian safer and easier within Tallahassee and Leon County.  Additionally, the Plan provides connectivity to other transportation systems, reduced vehicle conflicts, promotes a healthier mode choice, and provides equity for transportation disadvantaged populations.

The major difference between the 2004 BPMP and the adopted plan is the focus on local area trips to get from neighborhoods to activity centers, restaurants, and local events near those neighborhoods. With localized trips as a focus, the approach developed recommendations based on:

The Bicycle Comfort Level is a data driven analysis of the roadway network that utilized traffic volumes, number of lanes, speed, and existing bike facilities.  The results of this analysis related to a “Type of Cyclist“ that would use the road based on the comfort level.  This analysis also utilized the grade of the road to determine a best route. 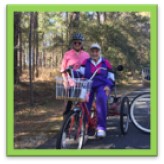 This type of cyclist requires a facility completely separated from the road such as a Shard-Use Path. 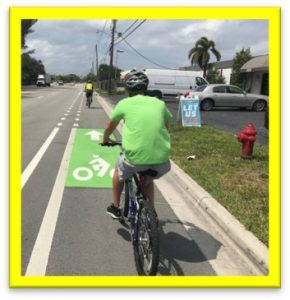 Cyclists who would like to ride their bike but have fears which are usually caused by vehicles. This type of cyclist needs low speeds, low volumes, and a separated facility such as a buffered bike lane. 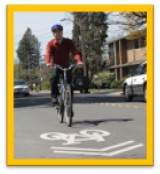 Cyclists who feel comfortable riding along a corridor next to vehicles at lower speeds and with facilities such as a bike lane or signage. 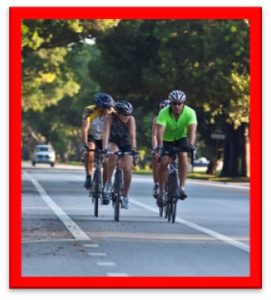 Cyclists who will ride along a corridor regardless of the conditions. These users have no problem sharing the lane with a vehicle traveling at speeds greater than 40 mph.

The application of the data for the Bicycle Comfort Level produced a map like this, to indicate where each type of the above type of cyclist is apt to ride.

This network consists of residential streets with low traffic volumes and low speeds so the priority mode can be given to bicycles and pedestrians.  These streets make ideal connections between more defined on-street facilities and multi-use paths and may include: 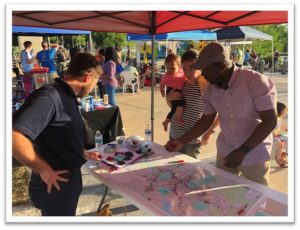 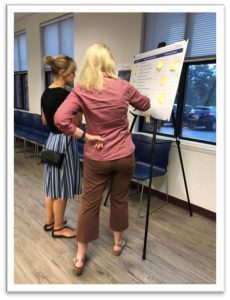 The public engagement provided significant information regarding the routes that riders currently use, existing condition issues that should be addressed, and new routes that would make significant connections and contributions to the system. This information was folded into the BCL analysis to produce several different types of improvements, including Sidewalks, the Neighborhood Network, Minor Projects, and Major Projects.  These efforts are described on the following pages.

The Neighborhood Network utilized the BCL to identify routes that are typically within neighborhoods that can connect to parks, activity centers, schools, businesses, or even within a neighborhood to walk or ride a bike. These roads are low volume and low speed that can give priority to bikes and pedestrians.

While the BCL provides a categorization for all streets, further refinement was necessary to identify the routes that provided the best Neighborhood Network linkages. This was accomplished using the slope of the facility to identify the ideal connections.

This network (an example map here) also makes ideal connections to more defined on-street facilities and shared-use paths and at some point, the Neighborhood Network will potentially require the crossing of roadways or intersections. These types of improvements were classified as Minor Projects.  Due to the complexity and sheer number of projects, the Neighborhood Network and Minor Projects, have been grouped and assigned route numbers.

Both the Neighborhood Network and Major Project process took into consideration key north/south and east/west connections within the network and were developed in concert with the existing Leon County Bike Network, and the Greenways Master Plan.

There are a lot of existing facilities in Tallahassee and Leon County to build from and connect to. This network (example map here) includes:

Sharrows are not considered to be a component of the existing system because these facilities are outside of the BCL 3 and 4 target group.

Ultimately, the BPMP network combined the Neighborhood Network, Major Projects, and the Existing Facilities to create the bike and pedestrian system. (example here)

After developing the project lists, Evaluation Criteria was applied to the Neighborhood Network and Major Projects to produce a score for each project. The projects were then placed into three (3) tiers.

The Major Projects list is straight forward in terms of the highest scoring project being in the first Tier, followed by the next highest scored project, etc.… until all the Major Projects were in Tiers 1, 2 or 3. These projects are less likely to move around tiers due to the capital investment to complete each project.

After developing the project list and the criteria the projects needed to have a cost associated with the improvements. The cost standards were developed in conjunction with City Underground Utilities and Tallahassee Leon County Planning Department for the Neighborhood Network, Minor Projects and Wayfinding. Major Project costs were developed from Florida Department of Transportation (FDOT) transportation costs.

The Minor Project tiered list includes a project description, the cost of the Neighborhood Network (sharrows, signage, and traffic calming), details of any associated Minor Project, and the total cost of the project, with and without 20% contingency costs.

The Major Project tiered list includes the project name, project limits, the type of improvement, length and cost that is provided in low, medium and high estimates, with and without 20% contingency costs.

The cost for these improvements ranges from $26M to $86M and would create 80 miles of new bike and pedestrian facilities. The costs related to Major Projects varies due to the unknown cost for right of way.  However, these costs will be refined based on initial Feasibility Studies to determine if the facility can and should be moved forward.  Lastly, the addition of right of way purchases will increase the cost of these facilities.

In addition to the “Chapter Materials” the Public Engagement efforts were integral to the overall planning process.  These files are also very large so they had to be divided into smaller files.  The first set of Public Engagement includes the Focus Area meeting that were held in 2018.

You can also keep up with the project on Facebook at:  TLC Bike and Pedestrian Master Plan